We released today a new version of the ShiningPanda plugin for Jenkins. For those who don't know this plugin yet, it is probably the easiest way to setup your Python projects with Jenkins. But let's have a look at the new features:

This field is now available on the following builders:

It determines how the Command contents is executed:

The XShell nature is recommended when a project is tested on both Unix and Windows. Conversions and best practices are:

For example this Unix style Command:

This publisher allows you to display the coverage HTML reports from Jenkins.

To enable it, step in the Post-build Actions and check the Publish coverage.py HTML report box.

Then reports are accessible via the Coverage.py Report link on project and build main page.

A new TOXENV pattern field provides an alternative to the Tox axis. Its value is expanded to retrieve the Tox environment to execute. 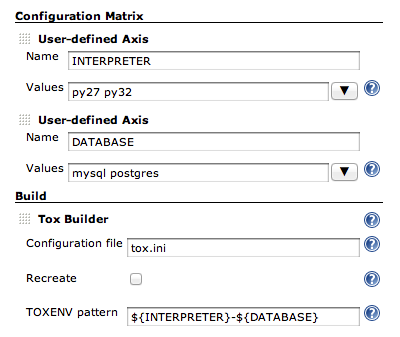 This is typically used with User-defined Axis, for instance an INTERPRETER="py27 py32" one and a DATABASE="mysql postgres" one. In this case, setting TOXENV pattern to ${INTERPRETER}-${DATABASE} will execute the following Tox environments: